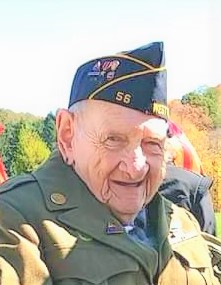 The son of the late Andrew H. and Lillian Bucklew Lipscomb, he was born December 2, 1925 in Terra Alta.

Andy was born and raised in Terra Alta,WV and was a long-standing member of the First United Methodist Church. Immediately after graduating high school, he went on to serve in the 4th Armored Division of the United States Army during WWII. Under General Patton’s leadership, Andy fought in one of the greatest battles, the Battle of the Bulge. After that, his division went on to liberate the first concentration camp in Ohrdruf. He was exceptionally proud to have served his country and share his stories with those he met throughout his life.

After returning home from the war, he married his sweetheart of 56 years and together they had his pride and joy, Andrea. Andy worked for Teets Oil Company as an Oil Salesman for most of his career. Websters Dictionary has his picture for the definition of hardworking. In his later years, you could find Andy mowing his grass on his 1970s Yanmar, tending to his apple trees and garden, feeding his pond fish, and attending many of his grandchildren and great-grandchildren’s life events. He never missed an opportunity to tell them how proud he was. Andy was known to always have a pocket full of Stokers tobacco, ornery jokes, and two dollar bills but more than anything he will forever be remembered for his kindness, generosity, and the legacy he leaves behind.

In addition to his parents, he was preceded in death by his wife of 56 years, Betty M. Lipscomb in 2006 and his daughter, Andrea L. Lockwood in 2005; a brother, George Lipscomb and a sister, Janet Cuppett.

Family and friends will be received at the Arthur H. Wright Funeral Home, Terra Alta on Friday from 2-4 and 6-8 p.m. and from noon on Saturday, June 25, 2022, until the 1:00 p.m. time of service with Rev. Michael Lantz officiating.  Burial will follow in the Terra Alta Cemetery with military graveside services conducted by the Preston County Honor Guard and the WVANG Honor Guard.

Condolence may be made to the family at www.arthurwrightfuneralhome.com

Share Your Memory of
Howard
Upload Your Memory View All Memories
Be the first to upload a memory!
Share A Memory
Plant a Tree