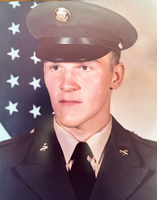 Ernest M. Strawser Durr, Sr., 61 of Terra Alta, went home to his Lord and Savior on July 25, 2018 at home with family by his side. The son of the late Nellie Marie Durr Ford Hussing and Norman Franklin Strawser, he was born January 9, 1957 in Oakland, MD. He was a member of the Freeport King James Bible Church, Terra Alta. He was a U.S. Army veteran of the National Guard of 13 years. He was a carpenter most of his life. He is survived by his wife of 39 years, Debbie (Snyder) Durr; a daughter, Stacie Street of Terra Alta; a son, Ernest Durr, Jr. and wife Jesi of Blackstone, VA; two grandsons, Sean and Wyatt Street and expecting a granddaughter, Kyla Grace Durr on September 4, 2018; three brothers, Jim and Mike Ford both of Oakland, Terry Ford of Morgantown and a sister, Barbara Rose of Morgantown. In addition to his parents, he was preceded in death by a sister, Pam Ford. Family and friends will be received at the Arthur H. Wright Funeral Home, Terra Alta on Saturday from 2-4 and 6-8 and from 11:00 on Sunday, July 29, 2018 until the 1:00 time of service with Pastors Billy Foster and John Marshall officiating. Burial will follow in the Mt. Olivet Cemetery, Aurora with military honors accorded by Vietnam Veterans of America, Chapter 977, Preston County WV and WVANG Military Funeral Honors, Camp Dawson. Condolences to www.arthurwrightfunralhome.com