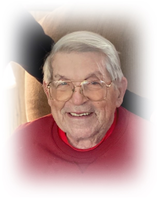 Robert O. Freeland, 90, of Terra Alta, (Freeland Settlement), died Sunday January 19, 2020 at home surrounded by family. The son of the late Harland F. and Lucy Parsons Freeland he was born April 16, 1929 in Kingwood. He was a loyal life-time member of Freeland United Methodist Church where he was the lay leader for many years. He was a U.S. Army Veteran. He was an avid hunter and loved farming and gardening. He had the honor of being an FFA State Farmer. He enjoyed riding 4 wheelers and family gatherings were very important to him. Bob retired from Hopemont Farm as the farm manager with over 30 years' service. He is survived by two sons and spouses, David A. and Angie Freeland and Gary R. and Lisa Freeland, all of Terra Alta; a brother and spouse, Harland J. "Jim" and Harriet Freeland of Terra Alta; four grandchildren, Jonathan Lewis (Nicole), Jay Lewis and fiancé Lori, Chelsea Freeland and fiancé Nathan, Aimee Lytle (Greg) and 10 great grandchildren. In addition to his parents, he was preceded in death by his wife of 58 years, Dorothy J. Freeland on 8/16/2019; two brothers, Don and Jennings Freeland and a sister, Maxine Feather. Family and friends will be received at the Arthur H. Wright Funeral Home, Terra Alta on Tuesday, from 2-4 and 6-8 and at the Trinity United Methodist Church from 10:00 am on Wednesday, January 22, 2020 until the 11:00 time of service with Rev. Eric Beeman officiating. Burial will follow in the Terra Alta Cemetery with military honors conducted by the Preston County Honor Guard. Condolences may be made at www.arthurwrightfuneralhome.com